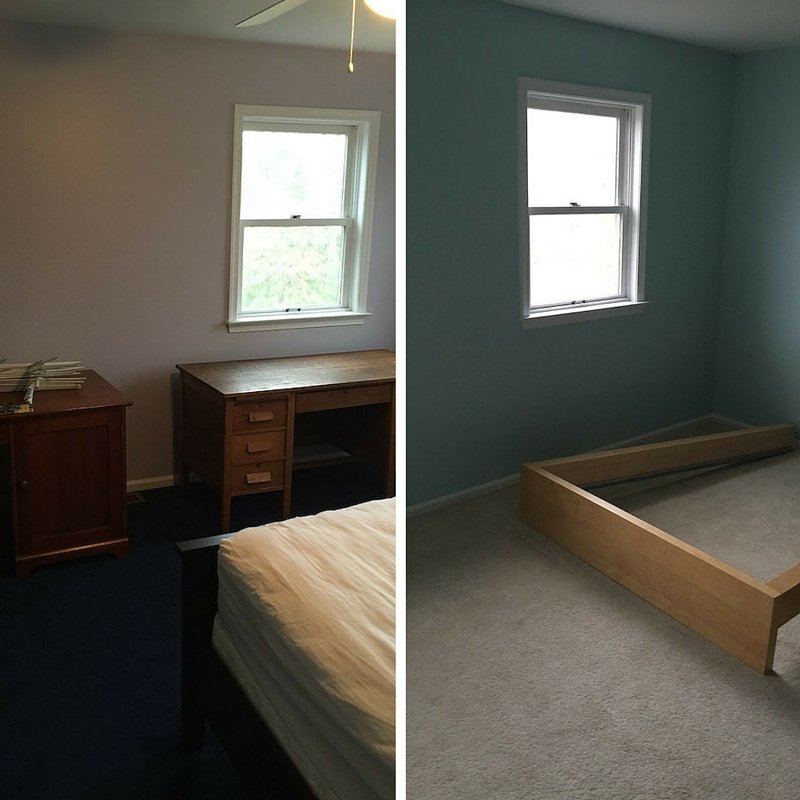 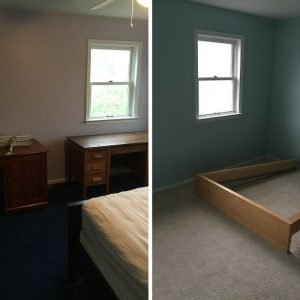 We’ve talked about it before – the downsides of dark paint in smaller spaces.

An Ambler homeowner was unhappy with the look of the bedrooms in their house. The red-colored window trim, two-toned walls, and dark ceiling paint in the master bedroom was making them feel claustrophobic. The second bedroom had a deep navy trim around the windows, and more dark paint on the ceiling.

In addition to giving the bedrooms a fresh new look, there was a third issue that needed to be addressed: they needed a nursery for the latest addition to their family!

LaffCo. Painting was more than happy to help the new parents. We decided to turn a former office into the new nursery, and give both bedrooms a complete makeover.

We started out with the master bedroom. The navy trim had to go, and was covered up in a more relaxing white color. We used the same white to brighten up the ceiling. Once the chair rails were removed, the walls were redone in Popular Gray by Sherwin Williams.

Moving on to the second bedroom, we began painting it in a lovely shade called Sleepy Blue by Sherwin Williams. However, after the first coat went on, we realized that the previous contractor had painted over a wallpaper border instead of properly removing it.

This created a bit of a hiccup, as we had to remove the wallpaper, fix the wall behind it, and repaint the entire room again. We didn’t let this dampen our spirits, and continued on our quest to make the second bedroom a comfortable place to sleep in.

Finally, it was time to move on to the office. The space was painted in the perfect color for a nursery: a sweet blue called Cay by Sherwin Williams.

We think the end results look great, and the homeowners are excited to finally relax in the comfort of their newly-painted bedroom. And we’re sure the newest addition to the family will love his brand new nursery!

Click here for your free quote on interior painting by LaffCo. Painting today.