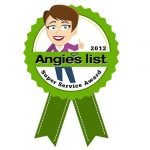 Thanks to positive reviews and feedback from our customers, LaffCo. Painting has been named an Angie’s List Super Service Award Winner for 2012 in interior painting.

Based in Plymouth Meeting, LaffCo. received approximately 12 reviews with an average rating of “A” in 2012 which led to the award. LaffCo. Painting serves Plymouth Meeting, Blue Bell, and the greater Philadelphia area.

Have a new painting project in the works? Get a free in-home estimate today and let’s get started!